You are here: Home » News » What Is Ice Hockey?

What Is Ice Hockey?

Ice hockey is a combination of versatile skating skills and agile skill in hockey. It is one of the most antagonistic collective ice sports and the official event of the Winter Olympics. The athletes wear skates and take the ice skates to slide and hit the ball. The ball is generally made of hard rubber, 2,54 cm thick, 7 and 62 cm in diameter, and has a ball weight of 156-170 g. During the game, each team played six people, three forwards, two defenders and one goalkeeper. The athlete uses the ice rod to hit the ball into the opponent's goal, winning with more.

Ice hockey is one of the most exciting collective sports in the world, and of course, the fastest one. Ice hockey is very popular in Europe, the United States, and Canada. This crazy sport is a high-speed, full-fledged project that combines technology, balance, and strength. The Winter Olympic Committee has two gold medals for men and women. Ice hockey is a confrontational collective competition on ice using ice skates and hockey sticks as tools. At the time of the match, the players on both sides played 6 players. The game was divided into three games. Each game was 20 minutes, the rest was 15 minutes, and one score was scored. One score was more.

The game kicked the ball in the scrimmage circle. The referee stood in the middle circle and landed the ball between two opposing centers. The goal of the game is to score a goal. It is an exciting sporting event that often occurs during high-speed movements. The ice hockey stadium is 61 meters long and 30 meters wide, and has a boundary wall with a height of 1.15 to 1.22 meters.

The goal is 1.22 meters high and 1.83 meters wide. In two teams, each team can report 20 athletes and 6 players in the game. The referee consists of two referees on the court, two goal referees, two sideline referees, one timekeeper and one scorekeeper. The two referees jointly controlled the entire match, each responsible for one half. The line referee is mainly responsible for signaling when someone is offside.

Ice hockey is a very competitive and even aggressive game.

Our company exports Full size Ice hocky net. we have a whole set of quality management system. If you have interested in our Ice hockey net, pls feel free to contact us. 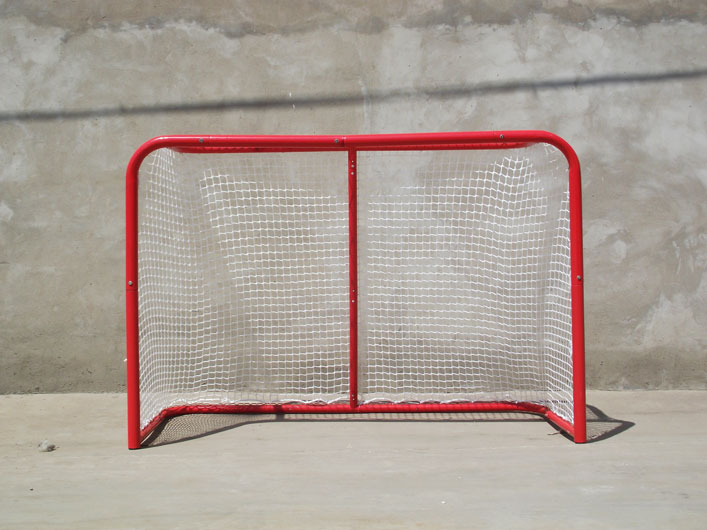